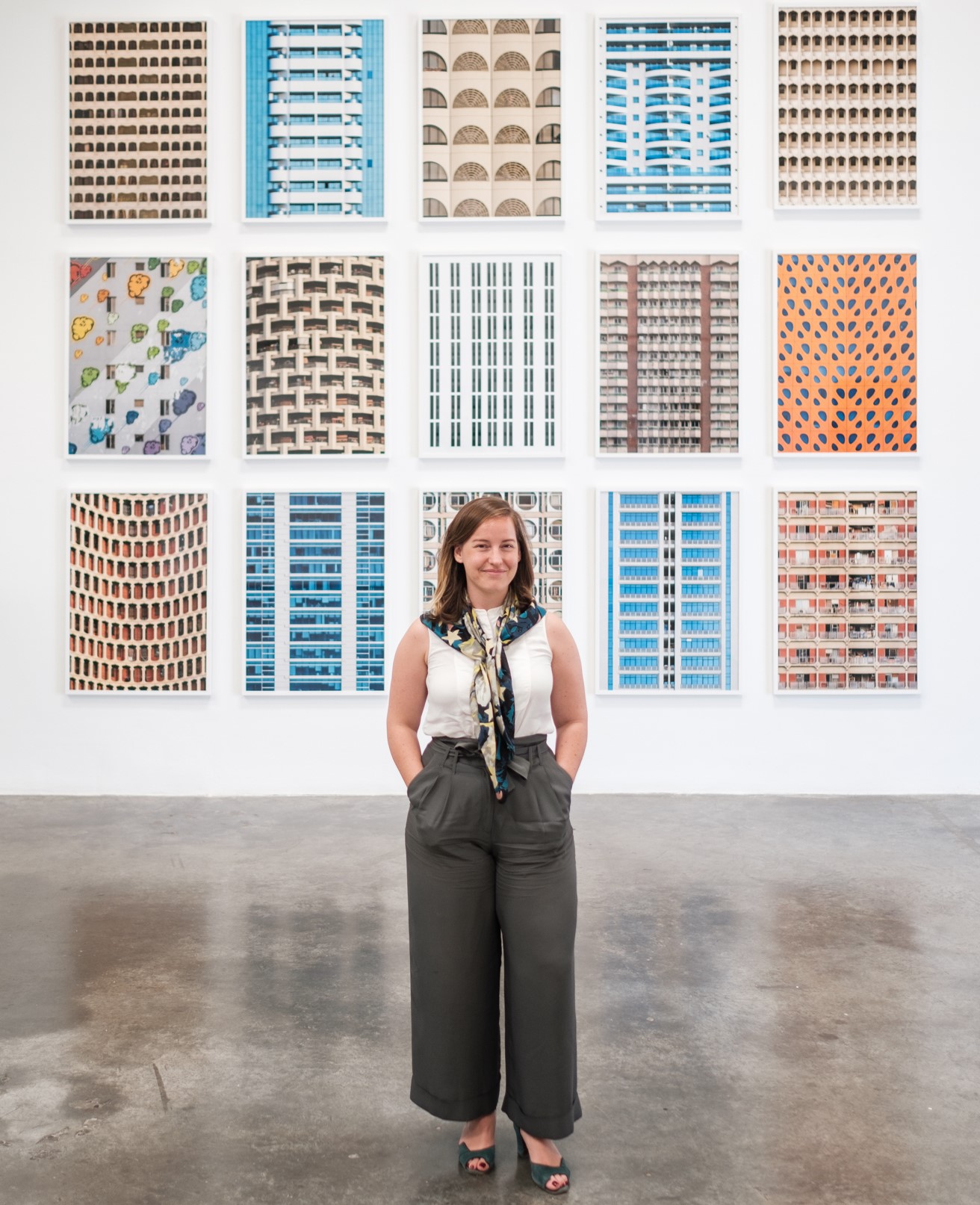 Lola Boatwright, Managing Director of Gulf Photo Plus, pictured in the GPP Gallery in front of a photography exhibition, Facade to Facade, by Hussain AlMoosawi.

Which school did you attended at Columbia? Why Columbia?

I graduated from Columbia College in 2011. At the time, I was applying from a boarding school in New Jersey where the most popular university after graduation was Princeton but I felt a particular draw towards Columbia.

I remember the application asking ‘aside from New York City, Why do you want to attend Columbia?’ I don’t know if that is still a question, but I would say I chose Columbia not for New York City but the fact that it is an exceptional Ivy in a big city. I had actually just finished studying abroad in Beijing and being part of a thriving, cosmopolitan place is something I wanted to keep as part of my life. As such, I believed Columbia’s location would allow for greater integration with NYC itself and more work opportunities.

In fact, since most Columbia classes were from Monday to Thursday, I always had an internship, a part-time job or something I took advantage of with that free Friday throughout my time as an undergraduate.

I know it’s very nerdy to jump into the curriculum but my mind just immediately jumps to certain classes that stood out. Taking Hinduism with Jack Hawley, for instance, has turned out to be a class I still think about years later. I also particularly enjoyed Lit Hum and my major classes.

For context. I was an East Asian studies major with a concentration in religion. As a result, I had some amazing classes on Tibetan Buddhism, biographies of Tibetan Buddhist Saints, and the Tibetan language. And who would have thought that some other electives I took – darkroom photography and Arabic – would be a common thread in my life almost 10 years later.

Did you have a favorite place on campus?

Avery library. Even though, as an East Asian Studies major, I spent a lot of time in the Starr library, I loved Avery and loved the sandwich place in the basement, Brownies.

I also really enjoyed going to Riverside Park. I appreciated it but in hindsight, I didn’t appreciate it enough.

Could you describe what you do today?

My career since Columbia has meandered. For the first 2.5 years of my career I worked in print media for an organization called Project Syndicate based in Prague. I had a little in between time in Morocco for about 1.5 years before getting my MBA at INSEAD.

Since the MBA, I have been running Gulf Photo Plus (GPP), which is an interesting combination of a local, homegrown SME that is also a regionally and internationally renowned photography center thanks to the GPP Photo Week, an event we host every February. People come from over 35 different countries to attend the workshops, listen to speakers, and explore the exhibitions.

GPP is very unique in that we are a private company that functions much like an institution with a mandate. Our mandate is to encourage people to tell the stories of the Middle East from their perspective as opposed to having outside photographers tell the story of what this place is. We also aim to improve the level of visual literacy and have people understand the difference between true, nuanced storytelling and very simplistic forms of storytelling.

We achieve the latter through our workshops, exhibitions, and by giving artists a platform to showcase their work. For instance, every summer, we encourage submissions for a certain theme we decide upon and in September, we hold an exhibition showcasing some of the submissions. The portfolio ranges from young amateurs to very well respected photographers who have exhibited across the world. To me, it’s very unique to have that breadth of experience in one exhibition.

Is this what you thought you'd be doing as a Columbia student?

Not at all. In fact, not even close. When I was at Columbia, I thought I would continue down the academic route. My plan at the time was to go into the Peace Corps partly to explore a new geography, somewhere like Morocco or Jordan. Finishing this, I thought I would complete my Masters then PhD, and that I would eventually become a professor.

That was derailed thanks to one of the debt-ceiling crisis where the Peace Corp lost 40% of their budget. My position, unexpectedly, got reallocated to one year later and so I began looking for a job. It was then I found the job at Project Syndicate and things have since taken a completely different direction.

I was surprised by how much I enjoyed negotiations when I got this role in sales – it was on the cusp of journalism and media but also business and sales. It was then I decided to pursue an MBA. It’s funny because when I was studying at Columbia, I thought I’d be the last person at the school to get an MBA. Like I said, though, threads from my studies have played a central role in my life just in ways I could not foresee.

How have you been able to leverage the skills and knowledge acquired during your time at Columbia to grow your career?

I’m going to give a roundabout answer to this question. When it comes to hard skills, my languages skills have definitely been the most highlighted in my career. When I was working at Project Syndicate, Chinese was absolutely essential and I ended up growing our presence there 5 fold in two years.

In other ways, I would say Columbia contributed to who I am in more of a way of defining my identity, to an extent, through my studies. The humanities element of my studies and the professors under whom I’ve studied have – as I’ve moved around from Prague to Morocco to France and now Dubai – helped me develop a core of who I am, which has carried me throughout life after graduation. It is not necessarily Columbia contributing to my career but more so to my life and who I am.

I would say don’t let your network become an echo chamber. It is human nature to join a cluster of similarly minded people – people who identify on religious or national lines; people who have majored in the same field as you – but I also think it is possible to have a network of people who do not necessarily look like you, but still do not challenge you.

I think the advantage of my jumping around to different geographies and industries is that I know how to speak to someone from a business background and someone from an arts background; I know how to speak to someone who makes a very basic salary and someone for whom salary may not be a concern. Being able to traverse different industries and stratospheres is an essential skill that is not necessarily taught, nor is it part of life at Columbia.

I think a very salient example that drives this point, and one that many can relate to, is Gulati’s infamous last lecture. It’s infamous because students are taken aback by his visceral experiences and interactions with the impoverished, but this conversation should not be the exception. Gulati does the student body a great service with this lecture, but more people and classes should be having these conversations; students should not be shocked by such a story.

If you could go back into time, what would do differently during your time at Columbia?

I felt as though I took chances while at Columbia. I had the privilege of truly exploring subjects outside my major since I had finished my language requirement fairly early, but I would have liked to learn Sanskrit. The reason I couldn’t is because I typically worked on Fridays but right now, I wish I forewent the money and learnt the language.

And if I could go back in time to when I was 22 or 23, right after I graduated, I would’ve been less concerned with stability and taken a chance with something more daring like freelance writing – I would have liked to pour my energy into a more creative endeavor.

Given that photography education is the core of what we do at GPP, I encourage those reading this to attend one of our workshops and immerse deeper into the field. Some start photography as a hobby with the belief that it is two-dimensional and concerned with aesthetics but I think it’s actually a lifestyle that shapes your way of seeing. When you have the camera motivating you to record something, you’ll notice your approach to the subject completely changes. That’s the beauty of photography: it is not necessarily the final result but rather your perspective when you are constantly taking pictures in your mind. And GPP is the best place (in Dubai anyway) to learn how to do that!